Walking together: the synodal pathway in the Holy Land 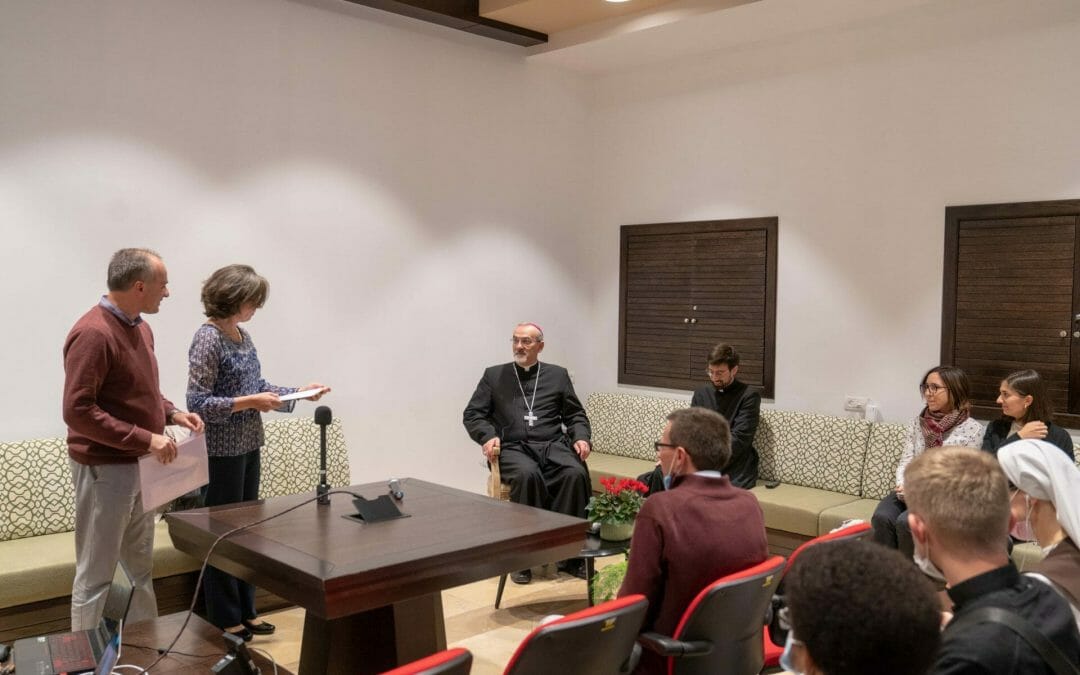 The 2021-2023 Synod convened by Pope Francis is an opportunity to listen to and dialogue with others, certain that one can go nowhere alone.  As Monsignor Pizzaballa, the Patriarch of Jerusalem, has said on several occasions, it is an opportunity to rediscover the true identity of the Church and the   "universality" that has been part of its constitution from the beginning.

“As we set out on this journey, we are more aware than ever that together, as disciples of Christ on this earth which is his home, we are all called to be his witnesses. Let us remember that his greatest desire is that we are one.” (cf. Jn 17).

This is what we read in the letter of 26 January 2022 sent by the Catholic Ordinaries to the heads of the Christian Churches in the Holy Land regarding the 2021-23 Synod which has been convened by Pope Francis and is entitled "For a Synodal Church: communion, participation, mission".

Pierbattista Pizzaballa, the Latin Patriarch of Jerusalem, signed the letter which had the explicit aim of informing and involving brothers and sisters in various local ecclesial communities about the synodal journey that has begun in the Holy Land. He underlined the importance of listening to each other in order to grow closer together on this fraternal journey.

Reference was made to the missionary nature of a "universal" Church, in Jerusalem, in particular. During a meeting held on 9 November 2021 after the opening of the Synodal Pathway, the Patriarch had spoken about this with the ecclesial movements and new communities present in the Holy Land.

"Our Church, the Church of Jerusalem, began life in the Upper Room at Pentecost, and, even then, it was both local and universal (…) especially in recent years, it has been enriched by many more charisms. For this reason, your presence here is not only a gift and a sign of God’s providence (…), but it is also a contribution to the fulfilment of what God, the Lord, desires. It ensures that this dimension of universality may always be present."

Many groups and associations took part in this meeting that provided an opportunity for dialogue and sharing. They included the Focolare Movement, the Neocatechumenal Way, Canção Nova, the communities of Chemin Neuf, Emmanuel and Béatitudes, Communion and Liberation, Koinonia John the Baptist, the Little Brothers of Hospitality, Regnum Christi, the Servidores del Evangelio de la Misericordia de Dios, the Shalom community and the Teresian Institution.

The participants all listened to each other and spoke of their own experiences. The valuable help of the Patriarch enabled them to better understand how to approach the Synod at a local level and what specific place the new communities and movements occupy in this process.

Answering various questions, Mgr Pizzaballa shared his thoughts on synodality which "is not just listening to each other. Synodality is a style – he said – a way of being, in the Church, but also outside the Church. It is an attitude. Listening and dialogue are expressions of this (…)".

According to the Latin Patriarch of Jerusalem, it is important to ask ourselves some questions: how is synodality, as a style of life or an attitude lived in each movement and group? In particular, we should ask how the process of synodality is "growing and developing" right there, in the place where we live. Furthermore, referring to the key words chosen by Pope Francis, namely communion, participation and mission, it would be important to understand which of these words each association or reality most embodies. In that way, each group could make its own specific contribution whilst remaining firmly anchored to the ground in the complex but also fruitful environment of the Holy Land.

This journey certainly begins within the various families, religious houses, parishes, movements and ecclesial realities, but the central idea is not to remain closed in on oneself, but rather to go out, to open up to others, to know each other better, to support each other, working – says the Patriarch to the movements and new communities – in "cross platforms", going to the heart of the experience of "communion" of the universal Church, the experience that, more than others, seems really difficult to live in the Holy Land.

"By communion I mean the awareness of belonging, of having freely received this gift, of having a life that is ‘inserted’ into other lives, where one person is part of the other and the other person is part of oneself. All this stems from the experience of the encounter with Jesus. (…) after having met the Lord and experienced salvation, you understand that this experience becomes complete and profound, when it is shared in a community (…). Once you have had this experience, it nourishes you, it sustains you, even where you are unable to go beyond certain limits, because of difficulties (…) It is something that has been given to you and you also feel the need to share it. This is communion.”

This letter sent by the Catholic Ordinaries to the heads of the various Christian Churches in the Holy Land renewed a deep longing in many people and opened up new horizons by underlining the desire to grow in fraternity and be enriched by the wisdom of others.

The hope of the Synodal Journey is that we should all experience 'being together' in the atmosphere similar to a shared meal where the group not only embraces suffering together but wants to immediately speak of the joys that life offers. It would be like the disciples’ journey to Emmaus. Although they were disappointed and sad, they walked together and, in communion, supported each other until the Risen Lord came to them. An opportunity not to be missed, to recognise him in our midst.