The fruits of Pentecost: the gift of the Holy Spirit, root of unity 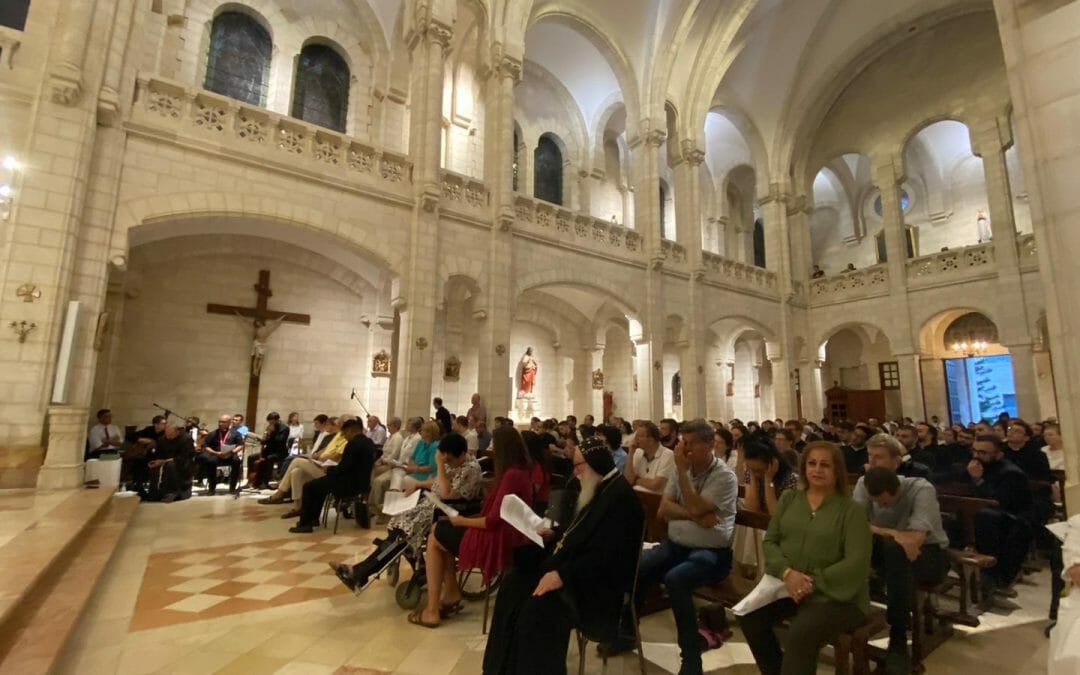 A new Pentecost for Jerusalem. Following a dialogue with the Latin Patriarch of Jerusalem, Pierbattista Pizzaballa, various ecclesial Movements and New Communities present in the Holy Land worked together, in a synodal way, for the Vigil of Pentecost 2022, experiencing the joy of feeling one body in the Church, animated and reinvigorated by the breath of the Holy Spirit.

On 4th June, 2022, a Pentecost vigil was held in the church of Saint Vincent de Paul in Jerusalem, organized for the first time by the faithful of the various ecclesial movements and new communities present in the Holy Land. A unique opportunity to meet and get to know each other better, to work together and feel like members of a single body, perfectly in line with what the ongoing synodal process proposes.

The Movements and Communities included:  the Neocatechumenal Way, Canção Nova, Chemin Neuf, the Emmanuel Community, the Beatitudes Community, Catholic Shalom, Communion and Liberation, John the Baptist Koinonia, the Focolare Movement, Regnum Christi, Servants of the Gospel of God’s Mercy (to the north of Nazareth), the Teresian Institution. The initiative, launched in the previous months by the Latin Patriarch of Jerusalem, Pierbattista Pizzaballa, involved various realities of the local Church which, with great enthusiasm, during the week preceding Pentecost took part in real "cenacle", moments in which, in small groups, it was possible to meet, pray, sing, read the Gospel and live together "waiting", just like the disciples and Mary did before them.

Patriarch Pizzaballa said in his homily during the vigil, "I find this to be a positive fruit of the Synod, because perhaps for the first time it has succeeded in getting people to share together paths of faith that, perhaps, were not so easily encountered before. (…) In a context, also ecclesial, of so many distinctions and struggles, we thank the Lord for this small but significant fruit of communion within the Church, which I hope will continue after Pentecost”.

The vigil turned into a real celebration, a great moment of sharing, in which songs, prayers and testimonies on how the gift of the Holy Spirit acted in the life of the People of God alternated, giving each one the grace of encountering the various charisms. Marcel and Boulos from the Focolare Movement, for example, found the way to live with hope at the loss of their son Jack, at only 15 years old; Sobhy's life was changed by the charism of Don Giussani and the Community of Emmanuel supported the marriage of Jean and Agnes in a moment of great crisis. uellJosé Pablo, on the other hand, recounted the abandonment of his father and his rebellion of faith, until he met the Neocatechumenal Way.

The liturgy of Pentecost revealed the fruits of the Holy Spirit in each one, a Spirit who, Bishop Pizzaballa continued, “is the intimacy of God in person, and is understood only by those who have an open and conscious interiority. To our Church, (…) to our communities and to each of us, who sometimes get lost in superficial dynamics, the Spirit teaches interiority, which enables us to see in depth, and therefore also to participate in the beauty, the joy, the life that really flows among us."

The greatest wealth, which once received, acquires even more splendour if one is able to give it back to the world, as happened to the disciples in the Upper Room, called to speak new languages, to be witnesses in the world of Christ's resurrection.

The Patriarch concluded, “The Spirit moreover reminds us of the relationship open to God and to others, the new language of communion beyond all division and discord. Moreover, the Spirit reminds us of the open relationship to God and others, the new language of communion beyond all division and discordance. I feel that we need to grow more on this point (…)in this fragmented, torn, divided, conflictual, sometimes even hostile society of ours, it can be reassuring to stay within the limits of our respective communities, (…) All of this is humanly understandable. The Holy Spirit, however, pushes us out, (…) accounting for the hope that is in us (cf. 1Pet. 3:15), to become witnesses. It means concretely to commit ourselves to unity. In our Church, first among the movements, among our different ecclesial realities, which are made up of different cultures, languages, and nationalities (…) the Spirit urges us to create a community, to feel that we share each other's lives, to become a gift for the other.