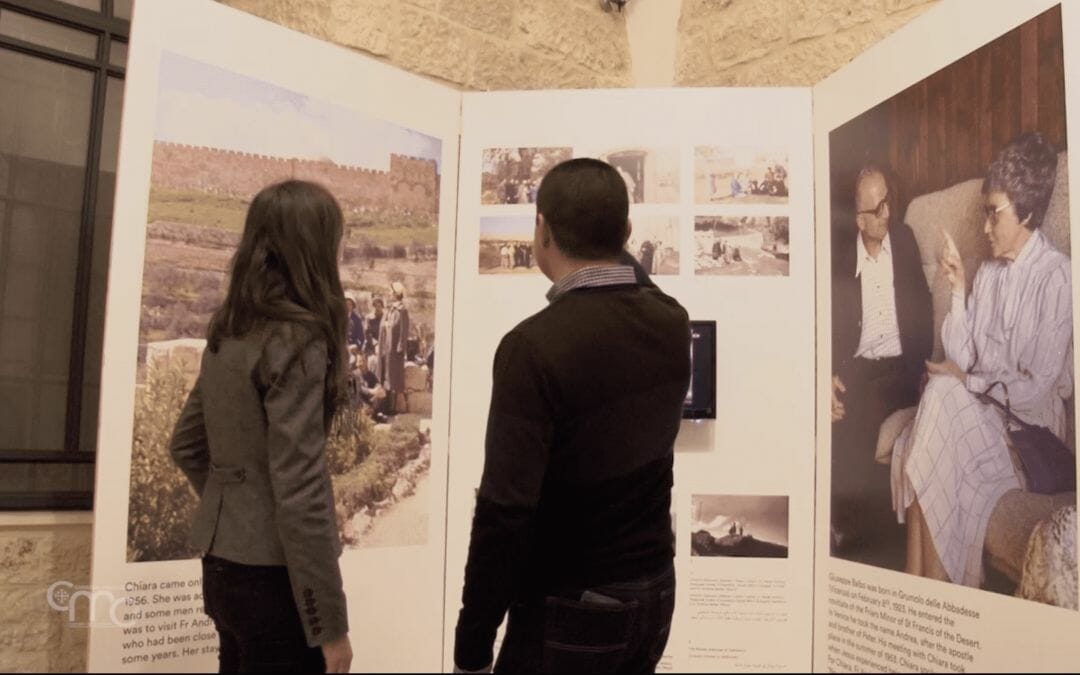 The call to unity launched by Chiara Lubich, foundress of the Movimento dei Focolari, reaches as far as the city that most of all embodies the encounter between different peoples, cultures, and religions. In Jerusalem, the Custody of the Holy Land hosts the re-adapted exhibition dedicated to the centenary of its birth which is set in Trento, Italy, curated by the Chiara Lubich Centre in collaboration with the Fondazione Museo Storico del Trentino.

A reference to Chiara Lubich’s spirituality is the passage from the Gospel of John in which Jesus prays to the Father “that all may be one”: a message – also addressed to people who do not have a religious belief – addressed to the different types of visitors who will participate in the exhibition, which is open for two weeks.

YISCA HARANI
Teacher
“I want to bring a Jewish audience here because I want them to know that these things exist. Usually, the media is only focused on the conflicts, the contrasts between people. It’s so reassuring, so revitalizing, to see that there’s collaboration, that there are people who act with courage. Without being “naive”, but remaining very realistic: we live in a place full of conflicts, and even in the midst of these conflicts we have to find common paths to cooperate.”

Divided into four parts, between images and video material, the exhibition “Chiara Lubich World City” also reveals the connection that Chiara Lubich had with the Holy Land, despite having visited it only once in 1956: the Movimento dei Focolari has been spreading here since the 1970s.

Br FRANCESCO PATTON, ofm
Holy Land Custos
“Throughout my life, I had the opportunity to meet and greet Chiara Lubich very briefly during one of her visits to Trento. I am happy that the Custody of the Holy Land can host this exhibition, and I am even happier that she reminds both a time like ours and a land like ours of the value of unity.”

CLAUDIO MAINA
Co-responsible Movimento dei Focolari in the Holy Land
“Linked to Chiara’s visit in 1956 there is also the idea of having a physical place in Jerusalem that would testify that unity is possible. With time, this intuition became clearer in the project of an International Centre for Unity and Peace: it is a project that we are carrying out and that we hope to be able to realize soon. If there is a place where it makes sense to be a presence of unity, it is Jerusalem.”